Life Is Good Because We Have Music 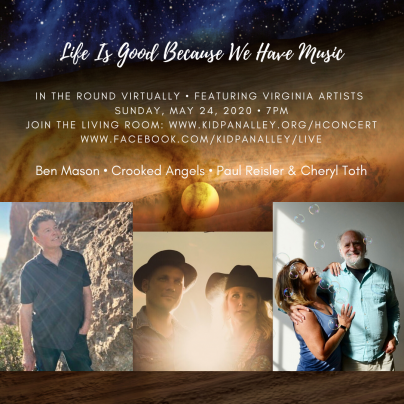 Virtual House Concert” series featuring some of Rappahannock’s finest musicians —  Sunday evenings at 7pm.  Hosted by KPA’s Paul Reisler & Cheryl Toth, each concert will feature local artists performing from their homes in an “in-the-round” format. Read the article in the. Rappahannock News.

To get the intimacy of an in-person house concert, we’ll have a “virtual living room” where a small audience can ask questions and talk live with the musicians.  These seats are limited, so sign up below to snag one! Everyone else can watch live at Facebook.com/KidPanAlley/live

Grab a drink and some favorite snacks, put your feet up, and get inspired by the songs and the stories behind them — Sundays nights at 7pm.  The concerts are free, but there will be a virtual tip jar if you’d like to show your appreciation to the musicians.

Ben Mason’s fourth CD, “Flesh and Bone”, released in 2018, features Steuart Smith of The Eagles.  Ben has been a performing musician since the 70’s and has appeared as a musical guest on The Today Show, written two nationally aired film scores for NBC, was the Grand Prize winner in the 10th Annual Mid- Atlantic Songwriting Contest, has appeared on over 100 albums and is currently signed to a publisher in LA who places his songs in film and television. He’s also a mixed media constructionist, and is about to release his first novel, “ Big Boy Movers, Sex, Trucks and Rock and Roll “ about his life as the owner of a rock and roll moving company.  www.benmasonexperience.com, www.benmasonsongs.com

The Crooked Angels (Jamie and Amy Potter) celebrate everything that is earnest, downhome, and funky in the American musical tradition. Their debut record Bread and Bourbon speaks to this broad love of the barrelhouse and the holler, the honky-tonk and the juke joint. Inspired by the hardscrabble poetry and heart worn songwriting of John Prine, Townes van Zandt, The Band, and Nanci Griffith (to name a few key influences), the duo delights in the livewire feel of a show where a performer’s ability is tested by what risks they are willing to take each moment to moment. Their second record Indian Summer is a road-tripping companion through landscapes physical and psychedelic and remains their proudest sonic achievement to date. They’ve performed at The Barns of Wolf Trap and at festivals like Rooster Walk in Southern Virginia, but they are often happiest in a small, warm room with good folks and a great vibe.

Paul Reisler and Cheryl Toth Your host Paul Reisler has been writing songs, performing, composing, recording, and teaching songwriting for over 45 years as the leader of Trapezoid, the founder of Kid Pan Alley, Music Director for Ki Theatre, and the leader of his current groups: Paul Reisler & A Thousand Questions and Three Good Reasons. He’s recorded dozens of albums, written thousands of songs, co-wrote Aesop’s Fables for Orchestra and Narrator, as well as 2 musicals—Bouncin’ and The Talented Clementine. He’ll be joined by Cheryl Toth, a former music teacher and elementary school Principal who has been working with Kid Pan Alley for the last 6 years.