History is everywhere in Rappahannock County. In fact, the entire Town of Washington, founded in 1796, is listed on the Register of National Historic Places. Officially established as a county in 1833, Rappahannock has preserved the best of America's rural way of life. Rappahannock's Civil War history is commemorated with more than 30 official markers of the Virginia Civil War Trails program. 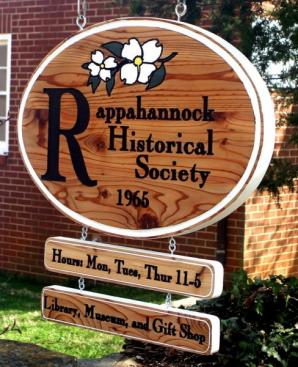 The Society is a nonprofit and is committed to collecting, preserving, interpreting, and disseminating the unique history and heritage of Rappahannock. Co., promoting knowledge of the past for a better understanding of the future. Our gift shop features historical maps, books, memorabilia and Rappahannock made products. Our Museum contains artifacts relating to the history and heritage of the county.

Built in 1921, Scrabble School is recognized for its local, state, and national significance. It is one of more the 5,000 schools for African-American children built across the South during the Jim Crow period thanks to Sears Roebuck cofounder Julius Rosenwald. So few "Rosenwald Schools" remain that in 2003 the National Trust for Historic Preservation listed them among America's "most endangered places." Scrabble School is listed on both the Virginia and the national registers of historic landmarks, and is featured on the Virginia's African-American Historic Sites Network. Thanks to a community effort, in 2009 it became one of the first Rosenwald Schools to be restored and one of an even more select group to have a body of work devoted to its history.

Sharing the stories of people who attended Scrabble School - and placing them withing the large historical context of the Jim Crow era - represents the essence of the Scrabble School Preservation Foundation's mission to preserve the school's history and to share its legacy through public outreach and educational programs.